For Victory over Japan Day in the U.S., see Victory Day (United States)

Victory over Japan Day (also known as Victory in the Pacific Day, V-J Day, or V-P Day) is a name chosen for the day on which Japan surrendered, in effect ending World War II, and subsequent anniversaries of that event. The term has been applied to both of the days on which the initial announcement of Japan’s surrender was made—to the afternoon of August 15, 1945, in Japan, and, because of time zone differences, to August 14, 1945 (when it was announced in the United States and the rest of the Americas and Eastern Pacific Islands)—as well as to September 2, 1945, when the signing of the surrender document occurred, officially ending World War II.

August 15 is the official V-J Day for the UK, while the official U.S. commemoration is September 2.[1] The name, V-J Day, had been selected by the Allies after they named V-E Day for the victory in Europe.

On September 2, 1945, a formal surrender ceremony was performed in Tokyo Bay, Japan, aboard the battleship USS Missouri. In Japan, August 15 usually is known as the “memorial day for the end of the war” (終戦記念日, Shūsen-kinenbi?); the official name for the day, however, is "the day for mourning of war dead and praying for peace" (戦歿者を追悼し平和を祈念する日, Senbotsusha wo tsuitōshi heiwa wo kinensuru hi?). This official name was adopted in 1982 by an ordinance issued by the Japanese government.[2]

August 15 is commemorated as Liberation Day in Korea.

On 6 and 9 August 1945, the United States dropped atom bombs on Hiroshima and Nagasaki. On 9 August, the Soviet Union declared war on Japan. The Japanese government on 10 August communicated its intention to surrender under the terms of the Potsdam Declaration, but with too many conditions for the offer to be acceptable to the Allies.

The news of the Japanese offer, however, was enough to begin early celebrations around the world. Allied soldiers in London danced in a conga line on Regent Street. Americans and Frenchmen in Paris paraded on the Champs-Elysées singing "Don't Fence Me In". American soldiers in Berlin shouted "It's over in the Pacific", and hoped that they would now not be transferred there to fight the Japanese. Germans stated that the Japanese were wise enough to—unlike themselves—give up in a hopeless situation, but were grateful that the atomic bomb was not ready in time to be used against them. Moscow newspapers briefly reported on the atomic bombings with no commentary of any kind. While "Russians and foreigners alike could hardly talk about anything else", the Soviet government refused to make any statements on the bombs' implication for politics or science.[3]

In Chungking, Chinese fired firecrackers and "almost buried [Americans] in gratitude". In Manila, residents sang "God Bless America". On Okinawa, six men were killed and dozens were wounded as American soldiers "took every weapon within reach and started firing into the sky" to celebrate; ships sounded general quarters and fired anti-aircraft guns as their crews believed that a Kamikaze attack was occurring. On Tinian island, B-29 crews preparing for their next mission over Japan were told that it was cancelled, but that they could not celebrate because it might be rescheduled.[3]

A little after noon in Japan Standard Time on August 15, 1945, Emperor Hirohito's announcement of Japan's acceptance of the terms of the Potsdam Declaration was broadcast to the Japanese people over the radio. Earlier the same day, the Japanese government had broadcast an announcement over Radio Tokyo that "acceptance of the Potsdam Proclamation [would be] coming soon," and had advised the Allies of the surrender by sending a cable to U.S. President Harry S Truman via the Swiss diplomatic mission in Washington, D.C.[4] A nation-wide broadcast by President Truman was aired at seven o'clock p.m. (daylight time in Washington, D.C.) on August 14 announcing the communication and that the formal event was scheduled for September 2. In his announcement of Japan's surrender on August 14, President Truman said that "the proclamation of V-J Day must wait upon the formal signing of the surrender terms by Japan".[5]

Since the European Axis Powers had surrendered three months earlier (V-E Day), V-J Day would be the official end of World War II. In Australia and most other allied nations, the name V-P Day was used from the outset. The Canberra Times of August 14, 1945, refers to VP Day celebrations, and a public holiday for VP Day was gazetted by the government in that year according to the Australian War Memorial.[6]

After news of the Japanese acceptance and before Truman's announcement, Americans began celebrating "as if joy had been rationed and saved up for the three years, eight months and seven days since Sunday, Dec. 7, 1941", as Life magazine later reported. In Washington, D.C. a crowd attempted to break into the White House grounds as they shouted "We want Harry!" In San Francisco two women jumped naked into a pond at the Civic Center to soldiers' cheers. More seriously, rioting sailors looted city stores, overturned automobiles, and attacked women, leaving 11 dead and 1,000 injured. The largest crowd in the history of New York City's Times Square gathered to celebrate.[7] The victory itself was announced by a headline on the "zipper" news ticker at One Times Square, which read "*** OFFICIAL TRUMAN ANNOUNCES JAPANESE SURRENDER ***"; the six asterisks represented the branches of the U.S. Armed Forces.[8] In the Garment District, workers threw out cloth scraps and ticker tape, leaving a pile five inches deep on the streets. A "coast-to-coast frenzy of [servicemen] kissing" occurred, with Life publishing photographs of such kisses in Washington, Kansas City, Los Angeles, and Miami.[7] 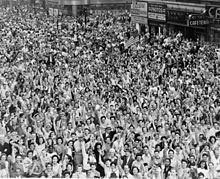 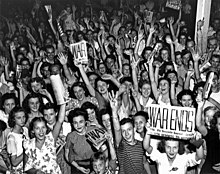 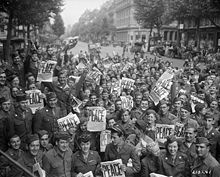 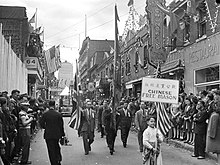 One of the best-known kisses that day appeared in V–J Day in Times Square, one of the most famous photographs ever published by Life. It was shot on August 14, 1945, shortly after the announcement by President Truman occurred and people began to gather in celebration. Alfred Eisenstaedt went to Times Square to take candid photographs and spotted a sailor who "grabbed something in white. And I stood there, and they kissed. And I snapped four times." Several people have since claimed to be the sailor and nurse.[9]

Another famous photograph is that of the Dancing Man in Elizabeth Street, Sydney, captured by a press photographer and a Movietone newsreel. The film and stills from it have taken on iconic status in Australian history and culture as a symbol of victory in the war.

On August 15 and 16 some Japanese soldiers, devastated by the surrender, committed suicide. Well over 100 American prisoners of war also were murdered. In addition, many Australian and British prisoners of war were murdered in Borneo, at both Ranau and Sandakan, by the Imperial Japanese Army.[10] At Batu Lintang camp, also in Borneo, death orders were found which proposed the murder of some 2,000 POWs and civilian internees on September 15, 1945.[11]

Ceremony aboard the USS Missouri[]

The formal signing of the Japanese Instrument of Surrender took place on board the battleship USS Missouri in Tokyo Bay on September 2, 1945, and at that time Truman declared September 2 to be the official V-J Day.[12]

As the final official surrender of Japan was accepted aboard the battleship USS Missouri in Tokyo Bay on September 2, 1945, the Nationalist Government of the Republic of China, which represented China on the Missouri, announced three-day holidays to celebrate V-J Day, starting September 3. Starting from 1946, September 3 was celebrated as "Victory of War of Resistance against Japan Day" (Chinese: 抗日戰爭勝利紀念日; pinyin: Kàngrì Zhànzhēng Shènglì Jìniànrì), which evolved into the Armed Forces Day (Chinese: 軍人節) in 1955. September 3 is recognized as V-J Day in the mainland China.[19] There are still "September 3" streets (in Chinese: 九三街; pinyin: Jiǔsān jiē) and primary schools (in Chinese: 九三小学; pinyin: Jiǔsān xiǎoxué) in almost every major city in mainland China.

Hong Kong was handed over by Imperial Japanese Army to the Royal Navy on August 30, 1945, and resumed its pre-war status as a British dependency. Hong Kong celebrated the "Liberation Day" (Chinese: 重光紀念日; Jyutping: cung4 gwong1 gei2 nim3 jat6) on 30 August (later moved to the Saturday preceding the last Monday in August) annually, which was a public holiday before 1997. After the transfer of sovereignty in 1997, the celebration was moved to the third Monday in August and renamed "Sino-Japanese War Victory Day", the Chinese name of which is literally "Victory of War of Resistance against Japan Day" as in the rest of China, but this day was removed from list of public holidays in 1999.

Gwangbokjeol, (literally "Restoration of Light Day") celebrated annually on August 15, is one of the Public holidays in South Korea. It commemorates Victory over Japan Day, which liberated Korea from Japanese rule. The day is also celebrated as a public holiday, Liberation Day, in North Korea, and is the only public holiday celebrated in both Koreas.

The Netherlands has one national and several regional or local remembrance services on or near to the 15th of August. The national service is at the "Indisch monument" (Dutch for "Indies Monument") in The Hague, where the Dutch victims of the Japanese occupation of the Dutch East Indies are remembered, usually in the presence of the head of state and the government. In total, there are about 20 services, also in the Indies remembrance center in Bronbeek in Arnhem. The Japanese occputation meant the twilight of Dutch colonial rule over Indonesia. To some, the remembrance has been tainted by revelations of so-called war crimes and other atrocities committed by Dutch military forces during the Indonesian colonial war 1945-1948, such as the case of the so-called Rawagede massacre.

On the day of surrender of Japan, Hồ Chí Minh declared an independent Democratic Republic of Vietnam.

Although September 2 is the designated V-J Day in the entire United States, the event is recognized as an official holiday only in the U.S. state of Rhode Island, where the holiday's official name is "Victory Day",[20] and it is observed on the second Monday of August. There were several attempts in the 1980s and 1990s to eliminate or rename the holiday on the grounds that it is discriminatory. While those all failed, the Rhode Island General Assembly did pass a resolution in 1990 "stating that Victory Day is not a day to express satisfaction in the destruction and death caused by nuclear bombs at Hiroshima and Nagasaki."[21] It is instead commemorative of those who fought, as Rhode Island sent a significantly above-average percentage of its population into the Pacific theater.[citation needed]

In Australia, the term "VP Day" is used in preference to "VJ Day".

Amateur radio operators in Australia hold the "Remembrance Day Contest" on the weekend nearest VP Day, August 15, remembering amateur radio operators who died during World War II and to encourage friendly participation and help improve the operating skills of participants. The contest runs for 24 hours, from 0800 UTC on the Saturday, preceded by a broadcast including a speech by a dignitary or notable Australian (such as the Prime Minister of Australia, Governor-General of Australia, or a military leader) and the reading of the names of amateur radio operators who are known to have died. It is organized by the Wireless Institute of Australia, with operators in each Australian state contacting operators in other states, New Zealand, and Papua New Guinea. A trophy is awarded to the state that can boast the greatest rate of participation, based on a formula including: number of operators, number of contacts made, and radio frequency bands used.[22]

It was suggested in the 1960s to declare September 2, the anniversary of the end of World War II, as an international holiday to be called World Peace Day. However, when this holiday came to be first celebrated beginning in 1981, it was designated as September 21, the day the General Assembly of the United Nations begins its deliberations each year.