Besides the innovations he brought to the oil industry and the construction of numerous bridges and buildings, Shukhov was the inventor of a new family of doubly curved structural forms. These forms, based on non-Euclidean hyperbolic geometry, are known today as hyperboloids of revolution. Shukhov developed not only many varieties of light-weight hyperboloid towers and roof systems, but also the mathematics for their analysis. Shukhov is particularly reputed for his original designs of hyperboloid towers such as the Shukhov Tower.

Vladimir Shukhov was born in a town of Graivoron, Belgorod uezd, Kursk Governorate (in present-day Belgorod Oblast) into a petty noble family. His father Grigory Ivanovich Shukhov was a minor government official, promoted for his efforts in the Crimean War. For a while, Grigory served as Mayor of Graivoron and later as an administrator in Warsaw.

In 1864 Vladimir entered Saint Petersburg gymnasium from which he graduated with distinction in 1871. During his high school years he showed mathematical talents, once demonstrating to his classmates and teacher an original proof of the Pythagorean theorem. The teacher praised his skills but he failed the grade for violating the textbook's guidelines.

After graduating from the gymnasium, Shukhov entered the Imperial Moscow Technical School, in which his teachers included Pafnuty Chebyshev, Aleksey Letnikov, and Nikolay Zhukovsky. In the beginning of the year 1876 Shukhov graduated from school with distinction and a Gold Medal. Chebyshev offered him a job as a lecturer in mathematics at the Imperial Moscow Technical School, but Shukhov decided to seek a job in the engineering industry instead.

In May 1876 Shukhov went to Philadelphia, to work on the Russian pavilion at the Centennial Exposition, the first official World's Fair in the United States, and to study the inner workings of the American construction and engineering industries. During his stay in the US, Shukhov came to know a Russian-American entrepreneur, Alexander Veniaminovich Bari (Александр Вениаминович Бари) who also worked on the organization of the Fair.

In 1877 Shukhov returned to Russia and joined the drafting office of the Warsaw–Vienna railroad. Within several months, Shukhov's frustration with standard and routine engineering made him abandon the office and join a military-medical academy.

On his coming to Russia in 1877, Bari persuaded Shukhov to give up his medical education and to assume the office of Chief Engineer in a new company specializing in innovative engineering. Shukhov worked with Bari at this company until the October Revolution. Their works revolutionized many areas of civil engineering, ship engineering, and oil industry. The thermal cracking method, the Shukhov cracking process, was patented by Vladimir Shukhov in 1891.

Shukhov always found time for a passionate hobby – photography.[3] The photographic works of Shukhov opened new trends ahead of their flourishing of Fine art photography. He made photos in various genres: reporting, city landscape, portrait, constructivism. About two thousand photos and negatives made by Shukhov have survived until this day.

After the October Revolution Shukhov decided to stay in the Soviet Union despite having received alluring job offers from all around the world. Many signal Soviet engineering projects of the 1920s were associated with his name. In 1919 he framed his slogan: We should work independently from politics. The buildings, boilers, beams would be needed and so would we. In the later 1930s during the Great Purge he retired from engineering work but was not arrested or persecuted.

Shukov died on 2 February 1939 in Moscow and was buried at the Novodevichy Cemetery. His many honours included the Lenin Prize (1929) and the title of Hero of Labour (1932).

Vladimir Shukhov is often referred as the Russian Edison for the sheer quantity and quality of his pioneering works[citation needed]. He was one of the first to develop practical calculations of stresses and deformations of beams, shells and membranes on elastic foundation. These theoretical results allowed him to design the first Russian oil tanker, new types of oil tanker barges, and a new type of oil reservoirs. The same principle of the shell on an elastic foundation allowed to theoretically calculate the optimal diameter, wall thickness and fluid speed for the fluid pipelines. Shukhov's projects were instrumental in constructing:

Shukhov made important contributions to the chemical industry:

Shukhov also left a lasting legacy to the Constructivist architecture of early Soviet Russia. As a leading specialist of metallic structures (hyperboloid structures, thin-shell structures, tensile structures), he may be compared with Gustave Eiffel. Shukhov's innovative and exquisite constructions still grace many towns across the former Russian Empire:

Shukhov towers on the Oka River, 1988 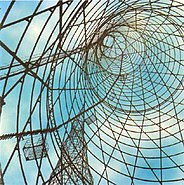 Shukhov towers on the Oka River in the suburb of Nizhniy Novgorod, 1988