In fortifications, a bailey or ward refers to a courtyard enclosed by a curtain wall. In particular, an early type of European castle was known as a Motte-and-bailey. Castles can have more than one ward. Their layout depends both on the local topography and the level of fortification technology employed, ranging from simple enclosures to elaborate concentric defences. In addition to the gradual evolution of more complex castle plans, there are also significant differences in regional traditions of military architecture regarding the subdivision into wards.

Wards can be arranged in sequence along a hill (as in a spur castle), giving an upper ward and lower ward. They can also be nested one inside the other, as in a concentric castle, giving an outer ward and inner ward.[1] On the other hand, Tower houses lack an enclosed ward.

The most important and prestigious buildings, such as the great hall and the keep or bergfried, were usually located in the inner ward of the castle. Nonetheless, there are a few castles where the keep is outside the inner ward, such as Château de Dourdan and Flint Castle. Lower or outer wards often held less important structures, such as stables, if there was not enough space in the inner ward. Outer wards could also be largely defensive in function, without significant buildings. In the concentric castles of the military orders, such as Krak des Chevaliers or Belvoir, the inner ward resembled a cloistered monastery, while the outer ward was little more than a narrow passage between the concentric enceintes. In general, wards could have any shape, including irregular or elongated ones, when the walls followed the contour lines of the terrain where the castle was sited. Rectangular shapes are very common (as in castra and quadrangular castles).

In the Germanic castles of the Holy Roman Empire, there is a distinction between a Vorburg and a Kernburg roughly corresponding to lower and upper wards in English castles.[3] In German-speaking countries, many castles had double curtain walls with a narrow ward between them, referred to as a Zwinger. The outer wall was a Zwingermauer or type of mantlet wall. These were often added at vulnerable points like the gate, but were rarely as fully developed as in the concentric castles in Wales or the Crusader castles.

Château Gaillard had an elaborate sequence of outer and inner wards 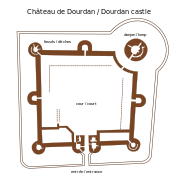 Château de Dourdan, with the keep just outside the inner ward

Retrieved from "https://military.wikia.org/wiki/Ward_(fortification)?oldid=5269495"
Community content is available under CC-BY-SA unless otherwise noted.