The Treaty of Friendship, Co-operation, and Mutual Assistance,[1] more commonly referred to as the Warsaw Pact, was a mutual defense treaty between 8 communist States of Central and Eastern Europe in existence during the Cold War. The founding treaty was established under the initiative of the Soviet Union and signed on 14 May 1955, in Warsaw. The Warsaw Pact was the military complement to the Council for Mutual Economic Assistance (CoMEcon), the regional economic organization for the communist States of Central and Eastern Europe. The Warsaw Pact was in part a Soviet military reaction to the integration of West Germany[2] into NATO in 1955, per the Paris Pacts of 1954 [3][4][5] but was primarily motivated by Soviet desires to maintain control over military forces in Eastern Europe.[6]

The strategy behind the formation of the Warsaw Pact was driven by the desire of the Soviet Union to dominate Eastern Europe. This policy was driven by ideological and geostrategic reasons. Ideologically, the Soviet Union arrogated the right to define socialism and communism and act as the leader of the global socialist movement. A corollary to this idea was the necessity of intervention if a country appeared to be violating core socialist ideas and Communist Party functions, which was explicitly stated in the Brezhnev Doctrine.[8] Geostrategic principles also drove the Soviet Union to prevent invasion of its territory by Western European powers, which had occurred most recently by Nazi Germany in 1941. The invasion launched by Hitler had been exceptionally brutal and the USSR emerged from the Second World War in 1945 with the greatest total casualties of any participant in the war, suffering an estimated 27 million killed along with the destruction of much of the nation's industrial capacity.

As early as 1950, the USSR was leading large-scale military exercises with Polish troops acting in a subordinate role to Soviet commanders.[9]

Prior to the formation of the Warsaw Pact the USSR engaged in several diplomatic initiatives to hinder the establishment of a cohesive, effective and inclusive NATO structure. In March 1954 the USSR, fearing "the restoration of German Militarism" in West Germany, requested to join NATO.[10][11][12] The Soviet request to join NATO arose in the aftermath of the Berlin Conference of January–February 1954. Molotov made different proposals to have Germany reunified[13] and elections for a pan-German government,[14] under conditions of withdrawal of the four powers armies and German neutrality,[15] but all were refused by the other foreign ministers, Dulles (USA), Eden (UK) and Bidault (France).[16] Consequently, Molotov "seeking to prevent the formation of groups of European States directed against other European States"[17] made a proposal for a general European treaty on collective security in Europe "open to all European States without regard as to their social systems"[17] which will have included the unified Germany (thus making EDC - perceived by USSR as a threat to its own security - unusable), but again Eden, Dulles and Bidault opposed the proposal.[18]

On 23 October 1954 the Federal Republic of Germany was finally admitted to the North Atlantic Pact. The incorporation of West Germany into the organization on 9 May 1955 was described as "a decisive turning point in the history of our continent" by Halvard Lange, Foreign Affairs Minister of Norway at the time.[19] A major reason for Germany's entry into the alliance was that without German manpower, it would have been impossible to field enough conventional forces to resist a Soviet invasion.[20]

Unable to split NATO diplomatically, on 14 May 1955, the USSR and other seven European countries established the Warsaw Pact in response to the integration of the Federal Republic of Germany into NATO, declaring that: "a remilitarized Western Germany and the integration of the latter in the North-Atlantic bloc [...] increase the danger of another war and constitutes a threat to the national security of the peaceable states; [...] in these circumstances the peaceable European states must take the necessary measures to safeguard their security".[21]

The eight member countries of the Warsaw Pact pledged the mutual defense of any member who would be attacked; relations among the treaty signatories were based upon mutual non-intervention in the internal affairs of the member countries, respect for national sovereignty, and political independence. However, almost all governments of those members states were directly controlled by the Soviet Union.

The founding signatories to the Treaty of Friendship, Cooperation and Mutual Assistance consisted of the following communist governments:

For 36 years, NATO and the Warsaw Treaty never directly waged war against each other in Europe; the United States and the Soviet Union and their respective allies implemented strategic policies aimed at the containment of each other in Europe, while working and fighting for influence within the wider Cold War on the international stage.

In 1956, following the declaration of the Imre Nagy government of withdrawal of Hungary from the Warsaw Pact, Soviet troops entered the country and removed the government. Soviet forces crushed the nation-wide revolt, leading to death of an estimated 2,500 Hungarian citizens.

The multi-national Communist armed forces’ sole joint action was the Warsaw Pact invasion of Czechoslovakia in August 1968. All member countries, with the exception of the Socialist Republic of Romania and the People's Republic of Albania participated in the invasion.

Beginning at the Cold War’s conclusion, in late 1989, popular civil and political public discontent forced the Communist governments of the Warsaw Treaty countries from power – independent national politics made feasible with the perestroika- and glasnost-induced institutional collapse of Communist government in the USSR.[22] In the event the populaces of Hungary, Czechoslovakia, Albania, East Germany, Poland, Romania, and Bulgaria deposed their Communist governments in the period from 1989–91.

On 25 February 1991, the Warsaw Pact was declared disbanded at a meeting of defense and foreign ministers from Pact countries meeting in Hungary.[23] On 1 July 1991, in Prague, the Czechoslovak President Václav Havel formally ended the 1955 Warsaw Treaty Organization of Friendship, Cooperation, and Mutual Assistance and so disestablished the Warsaw Treaty after 36 years of military alliance with the USSR. The treaty was de facto disbanded in December 1989 during the violent revolution in Romania that toppled the communist government there. The USSR disestablished itself in December 1991.

Central and Eastern Europe after the Warsaw Treaty[edit | edit source]

Russia and some other post-USSR states joined in the Collective Security Treaty Organisation (CSTO).

In November 2005, the Polish government opened its Warsaw Treaty archives to the Institute of National Remembrance who published some 1,300 declassified documents in January 2006. Yet the Polish government reserved publication of 100 documents, pending their military declassification. Eventually, 30 of the reserved 100 documents were published; 70 remained secret, and unpublished. Among the documents published is the Warsaw Treaty's nuclear war plan, Seven Days to the River Rhine – a short, swift attack capturing Austria, Denmark, Germany and Netherlands east of River Rhine, using nuclear weapons, in self-defense, after a NATO first strike. The plan originated as a 1979 field training exercise war game, and metamorphosed into official Warsaw Treaty battle doctrine, until the late 1980s – thus why the People’s Republic of Poland was a nuclear weapons base, first, to 178, then, to 250 tactical-range rockets. Doctrinally, as a Soviet-style (offensive) battle plan, Seven Days to the River Rhine gave commanders few defensive-war strategies for fighting NATO in Warsaw Treaty territory.[citation needed] 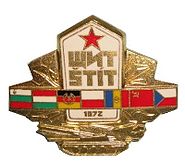 Badge A participant in joint exercises of Warsaw Pact "STIT" (1972)

Badge Warsaw Pact. The participants of the joint exercises in Bulgaria (1982) 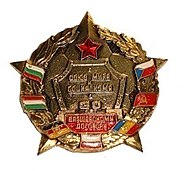 Retrieved from "https://military.wikia.org/wiki/Warsaw_Pact?oldid=5374612"
Community content is available under CC-BY-SA unless otherwise noted.