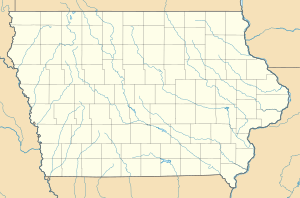 Receiving the Defense Secretary’s approval on July 21, the Air Force directed the Corps of Engineers to proceed with construction. 87.66 acres were acquired, when the Air Force constructed and operated Waverly Air Force Station, which included 84 structures, a firing range, a septic system, fuel storage tanks, and electrical power. It is noted that the Air Force had a year-to-year lease for this area beginning April 1950, but the leased area was not identical to the eventual property acquired by fee. Northwestern Bell was granted a 50-year lease on the installation to furnish communication services.

The 788th Aircraft Control and Warning Squadron was activated at Waverly on 10 April 1951. By early 1952, the squadron had activated a pair of AN/FPS-10 radars at this station, and initially the station functioned as a Ground-Control Intercept (GCI) and warning station. As a GCI station, the squadron's role was to guide interceptor aircraft toward unidentified intruders picked up on the unit's radar scopes. The AN/FPS-10 search radars continued operating until replaced in the 1960s with an AN/FPS-27. In 1959 an AN/FPS-6 and 6A replaced the other AN/FPS-10 height-finder radar.

During 1959 Waverly AFS joined the Semi Automatic Ground Environment (SAGE) system, feeding data to DC-07 at Truax Field, Wisconsin. After joining, the squadron was redesignated as the 788th Radar Squadron (SAGE) on 1 November 1959. The radar squadron provided information 24/7 the SAGE Direction Center where it was analyzed to determine range, direction altitude speed and whether or not aircraft were friendly or hostile. By 1963 one of the height-finder radars was replaced by an AN/FPS-90, and the station was re-designated as NORAD ID Z-83 on 31 July.

Routine operations were performed until the late 1960s when the Air Force inactivated the 788th and Waverly AFS on 30 September 1969. After its inactivation, the Air Force demolished one of the radar buildings (building 310), leaving the foundation intact. Building 309, another radar building, had its stainless steel dome removed, leaving the walls, foundation, and stairways intact.

The radar station was excessed by the Air Force to GSA in April 1971, which in August transferred 8.63 acres, which included the 3.94-acre family housing area, to the Dept. of the Navy. 4.13 acres had previously been transferred to the Army in May 1968, for use by the Iowa National Guard and known as the Waverly Army National Guard Training Facility.

Today it is abandoned. The station buildings are in various states of use or decay, the radar towers still standing.

Retrieved from "https://military.wikia.org/wiki/Waverly_Air_Force_Station?oldid=2405582"
Community content is available under CC-BY-SA unless otherwise noted.