The Gothic Wawel Castle in Kraków in Poland was built at the behest of Casimir III the Great, who reigned from 1333 to 1370, and consists of a number of structures situated around the central courtyard.

In the 14th century it was rebuilt by Jogaila and Jadwiga of Poland. Their reign saw the addition of the tower called the Hen's Foot (Kurza Stopka) and the Danish Tower.[1] The Jadwiga and Jogaila Chamber, in which the sword Szczerbiec, was used in coronation ceremonies, is exhibited today and is another remnant of this period.[2] Other structures were developed on the hill during that time as well, in order to serve as quarters for the numerous clergy, royal clerks and craftsmen. Defensive walls and towers such as Jordanka, Lubranka, Sandomierska, Tęczyńska, Szlachecka, Złodziejska and Panieńska were erected in the same period.

The Wawel Royal Castle and the Wawel Hill constitute the most historically and culturally important site in Po­land. For centuries the residence of the kings of Poland and the symbol of Polish statehood, the Castle is now one of the country’s premier art museums. Established in 1930, the museum encompasses ten curatorial departments responsible for collections of paintings, including an important collection of Italian Renaissance paintings, prints, sculpture, textiles, among them the Sigismund II Augustus tapestry collection, goldsmith’s work, arms and armor, ceramics, Meissen porcelain, and period furniture. The museum’s holdings in oriental art include the largest collection of Ottoman tents in Europe. With seven specialized conservation studios, the museum is also an important center for the conservation of works of art.

People have lived on Wawel Hill at the site of the Castle as early as fifty thousand years ago, in the Paleolithic Age. The settlement was apparently bustling with trade, assorted crafts and local farming. When more people began to settle down on the Wawel Hill and when trade became more efficient, the rulers of Poland took up their residence at the Hill as well.

During the early 16th century King Sigismund I the Old (Zygmunt I in Polish) and his wife brought in the best native and foreign artists including Italian architects, sculptors, and German decorators, to refurbish the castle into a splendid Renaissance palace.[3] It soon became a paragon of stately residence in Central and Eastern Europe and served widely as a model throughout the region.

In the fire of 1595, the northeast part of the castle burned down.[4] King Sigismund III Vasa rebuilt it, although of his efforts only the Senator Stairs and the fireplace in the Bird Room remain today.[4] In 1609 King Sigismund moved the capital to Warsaw, and tough times for Wawel began. Both the castle and other buildings were neglected despite the concerns of local governors. The Swedish invasions of 1655–1657 and 1702 contributed to the further deterioration of the castle.[5]

The Hill was occupied by the Prussian Army in 1794. Royal Insignia were stolen and never retrieved (apart from the Szczerbiec).[2] After the Third Partition of Poland (1795) Wawel, as an important defensive point, was modernised by Austrians with defensive walls.[4] The interior of the castle was changed and some of the buildings pulled down. In the second part of the 19th century the Austrians redesigned the defensive walls making them a part of a stronghold. However, in 1905 the emperor Franz Joseph I of Austria gave an order for Austrian troops to leave Wawel.[4] Restoration works began, with the discovery of the Rotunda of Virgin Mary as well as other relics of the past. The renovations of the Wawel Hill were financed by public subscriptions.

After World War I, the authorities of the newly independent Polish Second Republic decided that Wawel Castle was to become a representative building of the Polish state and would be used by the Governor and later by the President himself.[4] In 1921 the Polish Parliament passed a resolution which gave Wawel official status as the residence of the President of Poland. Following the ravages of World War II, by the decree of the State National Council, Wawel Castle became a national museum.

The Crown Treasury situated in the historic Gothic rooms which were used from the 15th century on for storing the Polish coronation insignia and Crown Jewels, feature on display priceless objects from the former Treasury that survived plunder, among them the memorabilia of Polish monarchs including members of their families and eminent personages, like the hat and sword given to John III Sobieski by the pope after the Battle of Vienna, as well as the coronation sword Szczerbiec.[2]

A column fragment of Wawel Castle has been incorporated into Chicago's landmark Tribune Tower. Located in its own niche over the upper-left corner of the main entrance, it is a visual tribute to Chicago's large Polish populace, the largest such presence outside of the Republic of Poland. 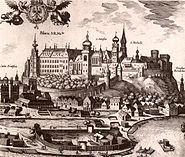 The castle seen from the Dębnicki Bridge.

Defensive walls below the Sigismund Tower.

Jupiter, Mercury and Virtue by Dosso Dossi, 1524, is one of the most valuable paintings in the Castle's collection.
Add a photo to this gallery

Retrieved from "https://military.wikia.org/wiki/Wawel_Castle?oldid=5224719"
Community content is available under CC-BY-SA unless otherwise noted.