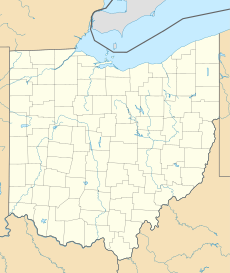 For the civil use of this facility, see Youngstown-Warren Regional Airport

Youngstown ARS is located at the Youngstown-Warren Regional Airport. Its primary mission is to serve as home of the 910th Airlift Wing, and its twelve (12) C-130H Hercules aircraft operated by two (2) C-130 squadrons. The 910 AW is a unique organization in the Air Force in that a portion of the wing's mission is devoted to the Department of Defense's only fixed-wing aerial spray mission.

The history of Youngstown ARS dates to the early 1950s when it was originally opened as Youngstown Air Force Base. Beginning in 1951, the Air Defense Command (ADC) began negotiations with the local community to construct an Air Force Base to defend the north-central United States. Negotiations were finalized and the new base was dedicated on 11 August 1952.[2] The housekeeping unit of the $10 million air defense base was the 88th Air Base Squadron with the ADC 86th Fighter-Interceptor Squadron being the operational unit flying F-84C Thunderjets. Assigned to ADC's Central Air Defense Force, the 86th would remain at Youngstown until 1960, eventually upgrading to the F-102 Delta Dagger.[3] On 18 August 1955, the 30th Air Division, 79th Fighter Group (Air Defense) was assigned.[4][5]

On 26 May 1952, the Air Force Reserve's 26th Fighter-Bomber Squadron was assigned to Youngstown. Formerly a Troop Carrier Squadron, the unit had been activated during the Korean War and after being inactivated, was assigned to Youngstown as a reserve T-33 Shooting Star squadron.[6] The 26th FBS received F-86H Sabres in 1958, but shortly afterward was inactivated and redesignated as the 757th Troop Carrier Squadron. The F-86s that had been received, but never flown while they were going through acceptance checks, and the T-33s, which were flying, were taken out and replaced by C-119 Flying Boxcars[7]

In 1959, the need for active duty Air Defense Command bases and regular Air Force fighter-interceptor operations were diminishing and the intent to scale back operations at Youngstown AFB was announced on 28 October 1959. The Air Force transferred command of Youngstown AFB to Continental Air Command (ConAC) (now the Air Force Reserve Command) on 1 March 1960 and the 79th Fighter Group was inactivated that date.[8][9][10]

As Youngstown-Warren ARS, the installation has 59 operational buildings, primarily aviation maintenance, training and administrative facilities. While there are dormitories for temporary lodging, there is no permanent housing on the installation.

The current host wing, the 910th Airlift Wing (910 AW) traces its lineage at Youngstown to 1963 when it was established as the 910th Troop Carrier Group flying the C-119 Flying Boxcar. 1969. The group later trained as a forward air control/tactical air support group from 1970–1971, as an air support special operations group from 1971–1973, and as a fighter group from 1973–1981, during which time it operated the A-37 Dragonfly and U-3 Blue Canoe and was operationally gained by the Tactical Air Command (TAC). It converted to an airlift mission in 1981 and received its first C-130 aircraft 27 March 1981, at which point it became the 910th Tactical Airlift Group and operationally gained by the Military Airlift Command (MAC).

In January 1992, the 910 TAG became the only full-time, fixed-wing aerial spray unit in the Department of Defense. In June of that year, as part of an Air Force-wide reorganization, MAC was disestablished and the unit was renamed the 910th Airlift Group, operationally-gained by the newly established Air Mobility Command (AMC).

Retrieved from "https://military.wikia.org/wiki/Youngstown-Warren_Air_Reserve_Station?oldid=4315916"
Community content is available under CC-BY-SA unless otherwise noted.